The Coinpanda Android and iOS app is coming soon!

Our team of developers is working hard to release our mobile app for Android and iOS on schedule. We expect to have the first version ready for beta testing approx the end of October.

Drop us a comment below if you want to be one of the first users to try the app and provide feedback!

I would like to beta test the Android app

Add me too, also on both ios and android

I would like to Beta test the ios app

Hi! Are you still accepting beta testers? If so, please put me down for the iOS app!

The mobile app is taking longer time than expected to finish, so the previous ETA is getting delayed once again, unfortunately.

Our main focus is of course developing and improving the web application, and we are working on so many new integrations, features, and updates that the mobile app has to take the backseat for now. We are still making progress each week though, so perhaps we can have the first alpha version released sometime in January next year. We will send out an invite to all users who have posted here.

Thanks for your patience and understanding!

Just wanted to share some of the screens for the mobile app. This is the original design we created back in August, so the final app will be slightly different of course since we are making changes and adjustments as development is progressing.

Will share more details later, and we would love some feedback or suggestions if you have!

Edit: I should also mention that the mobile app will have 100% of the same functionality as the website once the final version is released. This will include adding wallets, uploading CSV files, viewing transactions, downloading tax reports, etc. 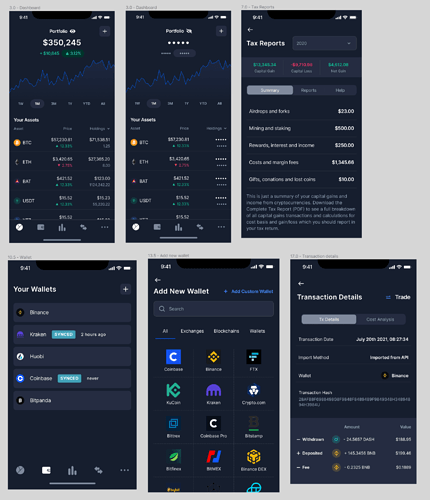 We are still working on the mobile app. What we can say is that it’s taking longer time than expected…!

Since we are developing the app to have all the same features as our website, we underestimated the complexity and timeline for the first release. We also don’t want to release the app before it meets our rather high bar for quality control and user experience - but rest assured, it WILL be released as soon as possible!

We will post any updates here later. In the meantime, thank you very much for being patient with this release!