CSV Import bug - UI? or Other? 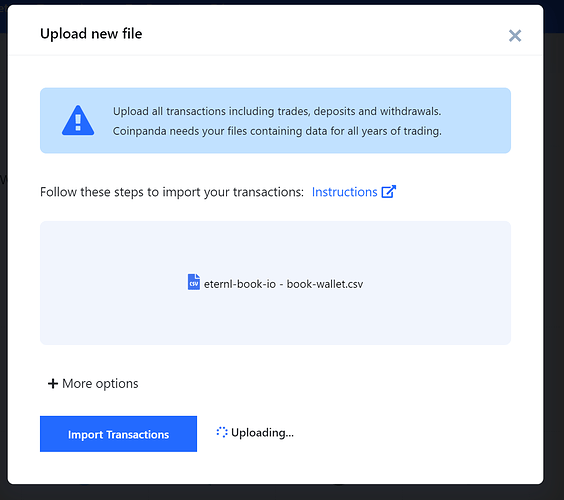 When importing a CSV file, the data appears to import when I confirm by loading another CoinPanda window; however, the first import screen will continue spooling and fail to reach completion.

While this may seem like a superficial bug, there are also issues with the values that it imports which lead me to believe there is an issue with the import itself. In the second image you can see how it imports ADA values as USD despite the fact that the currency type and amount is provided in the CSV file as guided by the CoinPanda template.

Note: I’ve used the CoinPanda example CSV as the framework for the import and included all tx hashes.

See transaction details here as proof of the description above.

Hi there. I can’t see from the image which wallet you imported this file to, so I’m unable to locate it from the backend. I assume it is Etrnal, but I don’t find your file. Did you delete the wallet perhaps?

In any case. This issue would be related to the data in the file itself. If you reach out to us via support chat or email, then you can send us the file and we can examine it.

When tokens default to USD, it is usually because of a syntax error, or incompatible usage of certain tags or transaction types in specific columns. I’d be able to tell you exactly, if I could look at the file

s or transaction types in specific

Thanks, I’ll re-import a wallet for you to review.

I’m still seeing an issue with the encoding and import.

Example for the following transaction line in the file.

There are a few errors in this file

You can review the valid transaction types here: Generic CSV

@Scuffy_Ruffles it looks like the issue is related to how the transactions are entered in the Coinpanda template as Ruben said.

In the example in the screenshot above, the “Received Currency” column should be blank/empty if this is a Send transaction (300 ADA Send + 0.182617 ADA fee)

Having that said, we will investigate this since we should not import any transactions not entered appropriately in the template file. Feel free to reach out in the live chat so we can investigate the specific file you had issues with.